The Story Behind the Stories

I began working as a professional writer two weeks after graduating from Yale, first as a reporter for Women’s Wear Daily. I had written a trial interview for WWD during my last college semester—an interview Kingman Brewster, then President of Yale. It was accepted, and published. A few months later, in June, I began as editor of the “accessories market” at WWD. In those days, all WWD reporters covered a market in the New York fashion industry, in addition to writing feature stories and covering events. I was very fortunate to have been hired, and to have worked closely with, the brilliant publisher, John Fairchild. John—or “Mr. Fairchild” as we called him—gave me tremendous latitude. Soon, on my own volition, I was also interviewing Harry Winston, Ellsworth Kelly, the art historian John Richardson, and Maya Angelou, among many other notable figures. A few years into my time at WWD, I was assigned the coverage of the New York designer collections as well.

In early 1979, I received a call from Abe Rosenthal, the legendary editor-in-chief of The New York Times; he offered me a job writing features for the Magazine. I began the summer of 1979.  Soon afterward, I embarked on a profile of Gloria Vanderbilt, which became my first cover story.

I wrote many pieces for The Times Magazine before my departure in 1981. By that time, I had received an advance for my first novel, Shadows & Light, and knew I wanted to focus on writing books. Throughout the following years, however, I continued to write articles for many publications, among them Vogue, House & Garden, Vanity Fair, and the Los Angeles Times Book Review. By then I was married and had two little children. 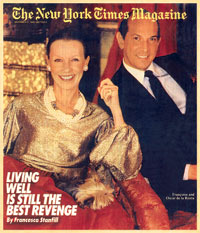 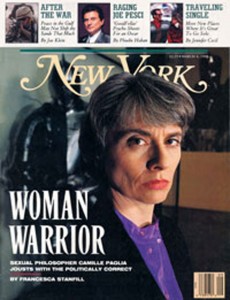 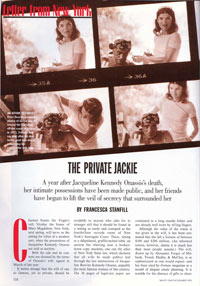 The Marketing of Gloria Vanderbilt

The editor of the Times Magazine, Edward Klein, and Carrie Donovan, head of fashion coverage, asked me to write a story on Gloria Vanderbilt soon after I began. Vanderbilt was an early exemplar of celebrities marketing products under their names—in her case, she had enjoyed great success with her jeans, which were produced by the Murjani Company. It was fascinating to spend time with Gloria, and to travel with her to the Midwest, for instance, as she promoted the GV merchandise at department stores. She was both utterly professional and one of the most disciplined people I have ever met. My fascination was such that the piece grew into a full scale profile of Vanderbilt and her life, as well as a study of the celebrity marketing phenomenon.

Living Well Is Still the Best Revenge: A Profile of Oscar and Franęoise de la Renta.

This was my idea, and my second cover story for the Magazine; it created considerable controversy when it was published. By then I had come to know many of the New York designers—Halston, Bill Blass, Diane Von Furstenberg, and, of course, Oscar de la Renta. I was often invited to the De la Rentas’ for dinner at their sumptuous New York apartment where Francoise, Oscar’s gifted and dynamic wife, assembled interesting people from all sorts of worlds—business, media, fashion, writing. The leitmotif of these groups was achievement, and, to no small extent, glamour. It was quite dazzling to a young woman like myself, still in her twenties.

I suggested to Abe Rosenthal that I write a piece on the world of Oscar and Françoise, showing how they were exemplars of a “New” New York, with its emphasis on success, celebrity, and power, rather than established old family names and pedigree. It was also fascinating to see how the De la Rentas’ used their homes as potent settings for the entertaining which was crucial to building their image—an image integral to Oscar’s success as a designer.

This was one of the first pieces of its kind which analyzed social ascent; as such, it sparked a lot of talk and, I was told, hundreds of letters to the editor—proof that I had struck a nerve. I was honored that it was cited in the obituary of Oscar de la Renta in the New York Times in 2014.

Two people were crucial to my writing this piece: my literary agent, Lynn Nesbit, and the brilliant Edward Kosner, then editor of New York. In the summer of 1990, Lynn encouraged me to read a recently published study of the arts and literature, Sexual Personae, by the firebrand critic and scholar, Camille Paglia. Late that year, Ed gave me the go-ahead to interview Paglia for New York.

The moment I read the brilliant, iconoclastic Sexual Personae, I was intensely curious to know the person behind the voice. That November, I attended a talk which Dr. Paglia gave a the 92nd Street Y on “Women in Hollywood.” Paglia’s point of view, language and approach were so startling and unconventional that I knew, that very night, that I had to interview her. A few months later, after speaking with Kosner, I contacted Paglia and arranged our first meeting. Since 1984, she had been Professor of the Humanities and the Arts at the University of the Arts in Philadelphia, where she still teaches.

Most of the interview took place at Spark’s Steak House; it began about 2 PM and went to past nine that night. All the while, I was taking notes and also had a tape recorder going. I have kept the transcription of that important interview, and will give it to a library one day. This was another piece which turned into a cover story. Subsequently, Paglia and Sexual Personae were featured in many publications, including The New York Review of Books. The following year she was interviewed by Steve Croft for “60 Minutes.”

I had come to know Jacqueline Kennedy Onassis in passing, from my early days as a reporter, especially when I worked for The New York Times Magazine. There I wrote pieces on several of the books she edited while editor at Doubleday; both had links to Diana Vreeland. In the Russian Style focused on the exhibition at the Met’s Costume Institute which Vreeland curated, and another, Allure, a collection of photographs of 20th century personae for which Vreeland wrote the text. It was during the writing of that piece when I had a long conversation with Jackie on the phone; at one point, discussing one of the figures portrayed in Allure, she said, “You know how it is, Francesca—when you look back on your life, you almost don’t recognize the person you once were. Like a snake shedding skins.”  To me, this statement spoke volumes about Jackie, and years later, I would include it in my piece about her for Vanity Fair.

I had always admired Jackie, and I had also heard, to my delight, that she very much liked my writing. When I learned she was ill, in April 1994, I wrote her. Her reply to my letter, dated April 25th, touched me very much, for it was clearly meant to say goodbye. I treasure that letter, and have kept it framed, in my study.

After her death later the following month, I learned that Sotheby’s would hold a sale of her estate. At the first intimations of this, I asked Graydon Carter, editor of Vanity Fair, if I could write a piece about the sale—but most importantly, about Jackie’s legacy. Like many of my pieces, it began with a specific focus, only to expand—in this, case, into an overview of her extraordinary life.