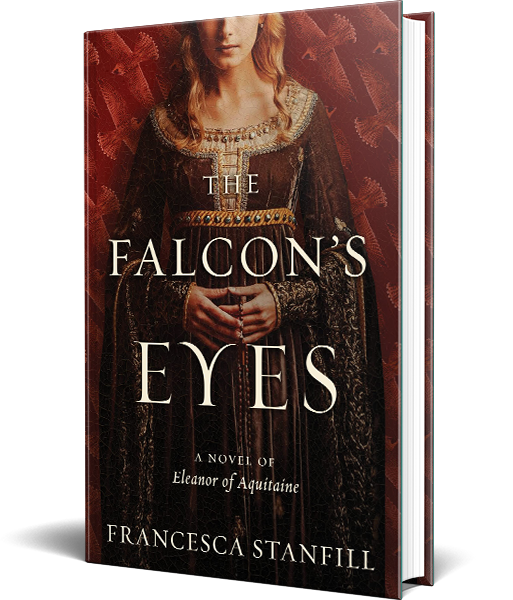 Willful and outspoken, sixteen-year-old Isabelle yearns to escape her stifling life in provincial twelfth century France. The bane of her mother’s existence, she admires the notorious queen most in her circle abhor: Eleanor of Aquitaine. Isabelle’s arranged marriage to Gerard—a rich, charismatic lord obsessed with falcons—seems, at first, to fulfill her longing for adventure. But as Gerard’s controlling nature, and his consuming desire for a male heir, become more apparent, Isabelle, in the spirit of her royal heroine, makes bold, often perilous, decisions which will forever affect her fate.

A suspenseful, sweeping tale about marriage, freedom, identity, and motherhood, The Falcon’s Eyes brings alive not only a brilliant century and the legendary queen who dominated it, but also the vivid band of complex characters whom the heroine encounters on her journey to selfhood: noblewomen, nuns, servants, falconers, and courtiers. The various settings—Château Ravinour, Fontevraud Abbey, and Queen Eleanor’s exiled court in England—are depicted as memorably as those who inhabit them. The story pulses forward as Isabelle confronts one challenge, one danger, after another, until it hurtles to its final, enthralling, page.

With the historical understanding of Hillary Mantel and the storytelling gifts of Ken Follett, Francesca Stanfill has created an unforgettable character who, while firmly rooted in her era, is also a woman for all times.

“Stanfill’s book is a celebration of Isabelle’s relationships not just with the queen but with a host of other women… The plot sends Isabelle shuttling between England and France, with some dramatic revelations toward the close.”
—New York Times Book Review (Read more)
“The enriching dialogue between brave Isabelle and wise Eleanor consistently intrigues, as does the bewitching blend of tainted nobility, secretive domestics, and palace plots. This is a crackling historical.”
—PUBLISHERS WEEKLY, STARRED REVIEW
“The Falcon’s Eyes is an engrossing historical novel detailing the life of Eleanor of Aquitaine… Francesca Stanfill creates a snapshot of what life was like for women in this time period, with all its restrictions and social pressures.”
—Oprah Daily (Read more)
“[The Falcon’s Eyes] sustains interest throughout the turning of so many pages due to the practically perfect storytelling of Francesca Stanfill… The story glitters with relevant detail at every opportunity.”
—NY Journal of Books (Read more)
“The Falcon’s Eyes is a richly woven, deeply satisfying work of medieval fiction.”
—Napa Valley Register (Read more)
“This book is a treasure trove. To use an old expression, it brings history to life.”
—San Francisco Book Review (Read more)

“With her eye for historical detail and flair for sympathetic heroines, Francesca Stanfill breathes new life into the medieval court of Eleanor of Aquitaine. The Falcon’s Eyes is a novel of epic proportions that succeeds in being both intimate and vast. History is Stanfill’s canvas, humanity her inspiration.”
—Amanda Foreman, bestselling author of Georgiana: Duchess of Devonshire

“Stanfill has persuasively re-imagined the Middle Ages, surrounding the legendary Queen Eleanor of Aquitaine with indelible characters in an immersive tale of intrigue, bravery, ruthlessness, and compassion…. The Falcon’s Eyes is a dazzling adventure, with riveting twists and turns and a surprising yet deeply satisfying conclusion.”
—Sally Bedell Smith, author of Elizabeth the Queen